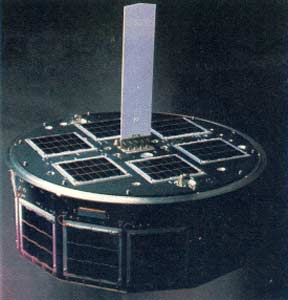 Built by Defense Systems Inc. (DSI) for the Defense Advanced Research Projects Agency (DARPA), the 12-sided Microsats (a.k.a. SCS, Small Communications satellite) measured 10 cm by 48 cm and weighed 22 kg each. They were designed to assess the use of low-earth orbit for global communications.

Each satellite operated in UHF, using an analog transponder for FM radio relay of voice communications and a digital transponder to relay data, message, facsimile and modest video traffic. The spacecraft with overlapped footprints provide near continuous communications, which would be global for three planes. The system was intended to provide data for ArcticSat, a system for communicating with nuclear submarines under the polar cap. The microprocessor-controlled digital communications payload was similar to the one used in MACSAT, but with less redundacy and less memory.

The 22.7 kg satellites were disk shaped, 170 mm high and 472 mm in diameter. The spacecraft were spin stabilised about the cylindrical axis at about 3 rpm, with the spin axis parallel to the orbit normal. The required spin accuracy was 10% and the pointing accuracy was 5 degrees. An magnetic attitude control system from ITHACO was used, consisting of two torque rods, a two axis magnetometer and a horizon crossing indicator. A radial thruster, 6000 psi (422 bar) cold gas N2 propulsion system with 4 years of fuel was included to establish and maintain the constellation spacing, providing thrust in any direction within the orbit plane. The uplink and downlink were full duplex at UHF, with 41 MHz spacing. The FM/FSK radio bandwidth was 30 kHz.

A stage separation malfunction cast the 7-satellite payload into a lower than anticipated orbit. Ground controllers could not make contact with the satellites and it appeared that they were lost. Some nine hours after launch, telemetry was acquired as the Microsats passed over the main control station. Apparently, a new fourth stage guidance system compensated for the separation glitch and modified the trajectory. Subsequent passes verified that all seven satellite were operating. Although the 359 by 457 km orbit fell short of the planned 719 km, the inclination was on target, allowing mission objectives to be met.

The lower than intended orbits caused the footprints to be separated, and in response two options were identified, namely phasing the satellites closer, or have gaps in coverage. Microsats 1,2,4 and 7 decayed Jan 23rd 1992, Microsat-3 and 5 on Jan 24th, and Microsat-6 decayed Jan 25th 1992, all were still operational at the time. The spacecraft had little operational use due to the limited orbital time.