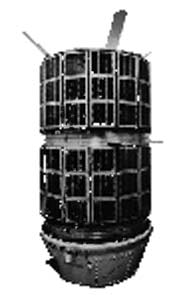 The two MACSAT (Multiple Access Communications satellite) spacecraft are third generation DSI digital communications satellites designed to demonstrate tactical UHF voice, data, fax and video store and forward capabilities for the U.S. military. The gravity gradient boom on one spacecraft appears to have failed to deploy. The other spacecraft was used during Operation Desert Storm for message relay to and from military troops in the Gulf region.

The MACSATs served as prototypes for the Navy's planned Arcticsat constellation of six similar satellites. In 1992, Congress deleted funds for this program.