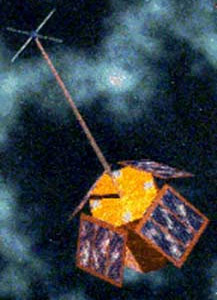 REX (Radiation Experiment) or ISES (Integrated Space Experiment System) is an Air Force Rome Laboratory ionospheric research satellite which will test the effects of the atmosphere on radio transmissions, and will employ GPS for on-board navigation and attitude control.

The first satellite, REX was launched in 1991 on a Scout-G1 launch vehicle.

A second one, REX 2 was put in orbit in 1995 by an air-launched Pegasus-XL rocket.