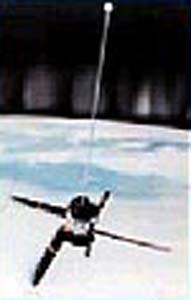 It was to continuie the mission of its predecessor, HILAT. The spacecraft was built on the Transit-O 17 navigational satellite that was retrieved from the Smithsonian's National Air & Space Museum, where it had been on display for 8 years.

Polar bear was gravity gradient stabilized by deployable boom with tip mass and was powered by 4 small deployable solar arrays.

The payload consisted of:

In November 1986, the satellite was launched on a Scout-G1 into orbit to measure the properties of the near-Earth plasma. However, as it entered its first period of fully sunlit orbit in February 1987, its attitude degraded significantly. The roll, pitch, and yaw angles began oscillating until the satellite finally inverted in May 1987. Consequently, several attempts to re-invert the satellite were undertaken. The third attempt proved to be successful when the momentum wheel was allowed to despin for an orbit before spinning it back to its maximum spin rate. The torque from the wheel in combination with the pitch rate induced from the despinning wheel inverted the satellite and captured it in the desired orientation.