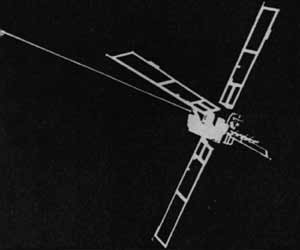 The HILAT (High Latitude Reseach Satellite) spacecraft (also known as P83-1) was the refurbished Transit-O 16 spacecraft, which carried experiments intended to provide remote-sensing and in situ measurements of physical quantities likely to provide insight into the dynamics of plasma-density irregularity formation in the high-latitude ionosphere. The main objectives of the HILAT mission were:

The satellite was three-axis stabilized by means of a Transit gravity-gradient boom and an added momentum wheel for yaw stabilization. The altitude was selected to be sufficiently high for scintillation and imager operation but low enough for the various in situ measurements. The inclination was chosen to give overhead passes nearly along the geomagnetic meridian at the preferred receiving locations. The orbit precessed 24 hours in approximately 6 months, so that observations during all hours of the day and night were possible in roughly one calendar season.

Following instruments were on board:

The Langmuir probe instrument failed on launch, and the Auroral imager failed on 23 July 83. All other instruments functioned until the final failure of the power source on 5 June 89.