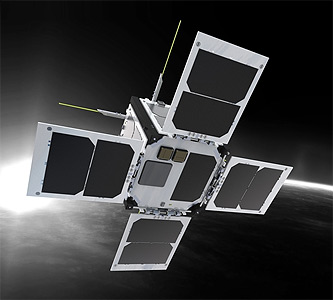 The Outernet satellites were a project to deliver information to the 4.3 billion people currently living without reliable internet access.

Outernets aim is to make web access free and unrestricted all over the world through space-based telecommunications. As the project develops, Clyde Space hopes to secure business from the New York based company to develop 200 satellites broadcasting the service.

The constellation of CubeSats in low earth orbit would revolutionise the provision of low cost data to remote regions of the world and Clyde Spaces expertise will help Outernet advance this unique project to supply an inexpensive alternative to traditional telecommunications infrastructure.

The Clyde Space designed 1U cubesats are prototypes for the Outernet constellation. Outernet planned to launch their initial three nanosatellites in 2017 on the 2nd and 3rd Rocket Lab Electron KS missions. The satellites were built, but no funding for launch was found, so the project has been cancelled.