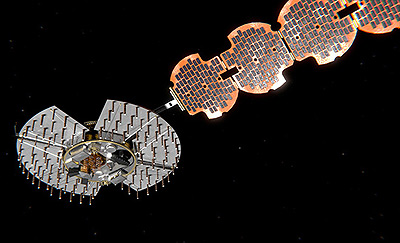 NTS-3, to be launched in the early 2020s will demonstrate new technologies and concepts along with experimental components and technologies for all three segments: space, control, and user. Through a combination of development contracts by traditional defense contractors and Small Business Innovative Research contracts, developments of amplifiers, digital waveform generators, antennas, ground systems, and PNT architectures are progressing.

At the heart of the experiment is an On-Orbit Digital Waveform Generator (ORDWG). The ORDWG enables additional experiments with advanced waveforms. AFRL has developed concepts for signal authentication and dynamic spectrum access, as well as building on the satnav waveform literature to consider enhancements such as Binary Coded Subcarrier, enhanced C/A-code, and a military acquisition signal. The AFRL Sensors Directorate and the Air Force Institute of Technology are key partners in developing ground test receivers for waveform experiments that will utilize advanced software defined receivers.

Other components that will be evaluated on NTS-3 include highly-efficient amplifiers utilizing Gallium Nitrite, and other technologies that provide power efficiency and flexibility. Improvements to accuracy and integrity will be evaluated with advanced clocks and on-board ephemeris compensation, with application to resilient PNT.

The NTS-3 space segment will include new components that have never been flown on GPS space vehicles. An advanced antenna system will demonstrate the effectiveness and affordability of high-gain regional power for military users, and the ability to control the beam in near-real time. One of the key experiments with the high-gain antenna is to determine the impact of a steerable beam on phase center bias and variation, for both the users of the high-power signals and the users of the Earth coverage signals.

Ground control segment experiments include high-gain regional antenna operation, use of commercial SATCOM assets for TT&C, placement of cybersecurity protection mechanisms and evaluating integrity enhancement techniques. One key area is emulating the CONOPS for a high-power regional beam request. This will include pointing location, at what elevation angle to turn on the beam, required received power level, duration, time required to initialize the payload in terms of software uploading (if needed), and hardware warm-up (if needed).

AFRL/RV is seeking collaboration from industry, government agencies, and universities in developing experimental concepts and participating in the flight experiment. The NTS-3 will have an experimental phase lasting approximately one year.

In September 2017 the project was put on indefinite hold due to a restructuring of the program, which was found inconsistent with the Space Vehicles direction for Position, Navigation and Timing (PNT). In 2017, AFRL restructured NTS-3 to emphasize mission objectives to demonstrate disaggregated, resilient PNT in a multi-layer space architecture, as outlined by the SEV and the SWC. In December 2018, AFRL and the Space and Missile Systems Center selected Harris as the prime contractor.

In support of NTS-3, Harris plans to develop the Agile Waveform Platform, a digital signal generator that can be reprogrammed on-orbit, enabling operators to quickly develop and deploy new signals to meet rapidly-evolving needs on the battlefield.

The satellite is expected to launch in 2022, with one year of experimental operations.