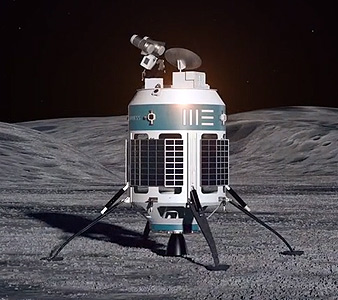 MX-1E is a minimum lunar lander developed by Moon Express as a prototype for the larger MX-1 lander. It is an entry to win the Google Lunar XPRIZE (GLXP).

MX-1E consists of two basically identical modules. One acts as propulsion module to propel the probe from low earth orbit towards the moon, while the second acts as the lunar lander. The propulsion systems use hydrogen peroxide and kerosene.

After landing on the lunar surface, the lander will reignite its propulsion system to move a distance of at least 500 m to satisfy the rules of the GLXP.

In October 2015, Moon Express contracted with Rocket Lab to launch three MX-1E landers on Electron rockets, which put the MX-1E into low earth orbit, where the onboard propulsion module performs the injection into a lunar transfer orbit.

After the Google Lunar XPRIZE (GLXP) ended, the company announced late 2018 or more likley 2019 as the date for the maiden launch. The launches of the MX-1E landers were later cancelled.