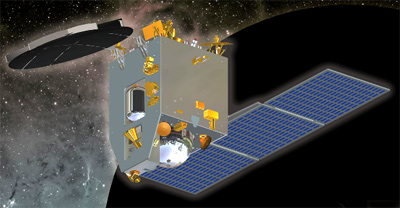 Mars Orbiter Mission (MOM), informally also called Mangalyaan, is India's first interplanetary mission to the planet Mars with an orbiter craft designed to orbit Mars in an elliptical orbit. The Mission is primarily technological mission considering the critical mission operations and stringent requirements on propulsion and other bus systems of spacecraft.

One of the main objectives of the first Indian mission to Mars is to develop the technologies required for design, planning, management and operations of an interplanetary mission. The probe is based on the Chandrayaan 1 lunar orbiter structure.

The spacecraft is based on a modified I-1K bus.

Following are the major objectives of the mission:

The 15 kg instrument suite consists of:

MOM was launched on a PSLV-XL rocket on 5 November 2013 into a highly eccentric earth orbit. Firing the on-board engine six times over several weeks (November 7, 8, 9, 11, 16, and December 1), MOM departed on a Mars-bound trajectory on 1
December 2013. Mars orbit insertion was successfully conducted on 23 September 2014. The in-orbit life time is about 6 to 10 months.