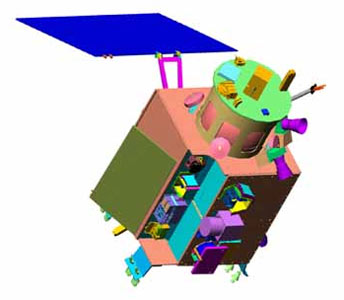 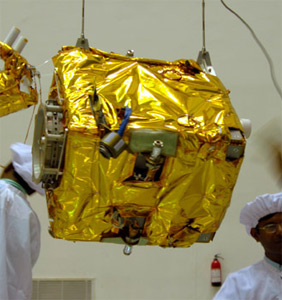 Chardrayaan-1 is the first Indian Mission to the Moon devoted to high-resolution remote sensing of the lunar surface features in visible, near infrared, X-ray and low energy gamma ray regions. This will be accomplished using several payloads already selected for the mission. In addition a total of about 10 kg payload weight and 10 W power are earmarked for proposals, which are now solicited. The mission is proposed to be a lunar polar orbiter at an altitude of about 100 km and is planned to be launched by 2007-2008 using indigenous spacecraft and launch vehicle of ISRO. The mission is expected to have an operational life of about 2 years.

Mission Objectives are to carry out high resolution mapping of topographic features in 3D, distribution of various minerals and elemental chemical species including radioactive nuclides covering the entire lunar surface using a set of remote sensing payloads. The new set of data would help in unravelling mysteries about the origin and evolution of solar system in general and that of the moon in particular.

In addition six such payloads have been selected out of the proposals received from the international scientific community in response to the announcement of opportunity made earlier. The payloads selected are:

The Moon Impact Probe (MIP) weighing 29 kg rode piggyback on the top deck of the main orbiter and was released at a predetermined time after the orbiter reached the final 100 km orbit to impact at a pre-selected location. During the descent phase it was in spin-stabilized configuration. The total flight time from release to impact on Moon was close to twenty minutes. The dimension of the impact probe was 375 mm × 375 mm × 470 mm.

There were three major payloads in the Moon Impact Probe: