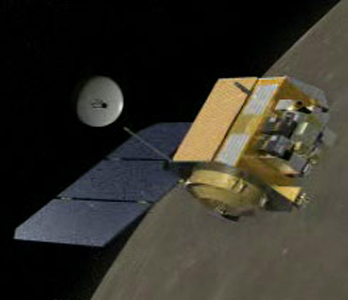 Set for a 2008 launch, Lunar Reconnaissance Orbiter (LRO) is planned to orbit the moon for at least one year and gather detailed maps of the lunar surface, data on the moon's radiation levels and an in-depth look at its polar regions for resources.

Goddard Space Flight Center in Greenbelt, Md. designed the spacecraft bus, while the instrument payload was provided by private industry. An Announcement of Opportunity for the payload was announced June 18 2004 and a final design is expected to be decided in November 2004. LRO is a measurement mission, not a science mission.

High-resolution cameras similar to those used in the one-meter resolution commercial earth observing satellites were required to photograph the lunar surface. Part of LRO's mission is to identify potential landing sites for future missions. LRO's imaging system also is expected to be able to look into permanently shadowed regions of the moon and its polar regions to look for signs of large water ice deposits.

LRO makes use of conventional technology instead of untested tools. A conventional approach also keeps costs down, an important point since the mission's total budget from development through first-year operations is set at about $90 million.

The mission is constrained to the budget of a Discovery class mission, so the launch vehicle was originally limited to a Delta 2. NASA dropped in early 2005 the Delta 2 in favour of an EELV launch to avoid stability problems with its spinning third stage, growing out of the heavy fuel load needed to get to the Moon. The LRO mission gains at least 1,000 kg in capacity for the LCROSS piggyback mission.