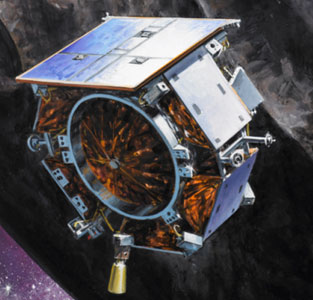 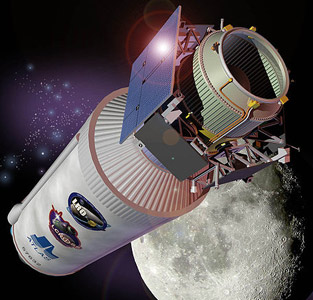 NASA announced in April 2006 that a small, 'secondary payload' spacecraft, to be developed by a team at NASA Ames Research Center, Moffett Field, Calif., has been selected to travel to the moon to look for precious water ice at the lunar south pole in October 2008. The smaller secondary payload spacecraft will travel with the Lunar Reconnaissance Orbiter (LRO) satellite to the moon on the same rocket, the Evolved Expendable Launch Vehicle (EELV), to be launched from Kennedy Space Center, Florida. The NASA Ames team proposed the secondary payload mission, which will be carried out by the Lunar CRater Observation and Sensing Satellite (LCROSS).

The LCROSS mission gives an excellent opportunity to answer the question about water ice on the moon. The LCROSS represents a very creative, highly innovative mission, turning the upper stage of the rocket that brought LRO to the moon into a substantial impactor on the moon.

After launch, the secondary payload LCROSS spacecraft will arrive in the lunar vicinity independent of the LRO satellite. On the way to the moon, the LCROSS spacecraft's two main parts, the Shepherding Spacecraft (S-S/C) and the Earth Departure Upper Stage (EDUS), will remain coupled.

As the spacecraft approaches the moon's south pole, the upper stage will separate, and then will impact a crater in the south pole area. A plume from the upper stage crash will develop as the Shepherding Spacecraft heads in toward the moon. The Shepherding Spacecraft will fly through the plume, and instruments on the spacecraft will analyze the cloud to look for signs of water and other compounds. Additional space and Earth-based instruments also will study the 2.2-million-pound (1000-metric-ton) plume. The 880-kilogram LCROSS probe will fly through the resulting plume and use its instruments to scan for water while taking photographs, then – 15 minutes after the upper stage booster's impact – the “shepherding” satellite will also crash into the crater floor. The LCROSS mission is expected to carve a Moon crater 4.8 meters deep, about 30 meters wide and toss up about 1,000 metric tons of lunar material.

The LCROSS mission will help to determine if there is water hidden in the permanently dark craters of the moon's south pole.

The LCROSS S-S/C was built the Northrop Grumman Eagle-0 bus, which is based on a free-flying ESPA secondary payload structure.