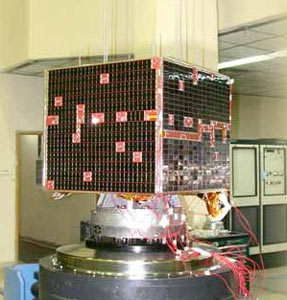 HAMSAT was a microsatellite for providing satellite based Amateur Radio Services to the national as well as the international community of Amateur Radio Operators (HAMs).

Launched as an auxiliary payload along with IRS P5 (Cartosat 1), the 42.5 kg HAMSAT met the long felt need of the Amateur Radio Operators in the South Asian region who possess the required equipment and operate in the UHF/VHF band based satellite radio communication. One of the transponders of HAMSAT has been developed indigenously involving Indian HAMs, with the expertise of ISRO and the experience of AMSAT-INDIA. The second transponder has been developed by a Dutch Amateur Radio Operator and Graduate Engineering student at Higher Technical Institute, Venlo, The Netherlands.

HAMSAT is India's contribution to the international community of Amateur Radio Operators. This effort is also meant to bring ISRO's satellite services within the reach of the common man and popularise space technology among the masses.

This satellite will play a valuable role in the national and international scenario by providing a low cost readily accessible and reliable means of communication during emergencies and calamities like floods, earthquakes, etc. Besides, it will stimulate technical interest and awareness among the younger generation by providing them with an opportunity to develop their technological projects including offering a platform. Some of the new technologies being tested in HAMSAT include Integrated Processor based Electronic Bus Management Unit, Lithium Ion Battery and Gallium Arsenide based Solar Panels.

After becoming operational, it has received the designation VO 52 or VUSat OSCAR 52.

Designed with a one year lifetime, HAMSAT's mission ended on 11 July 2014 after more than 9 years in orbit due to the failure of on-board lithium ion batteries.