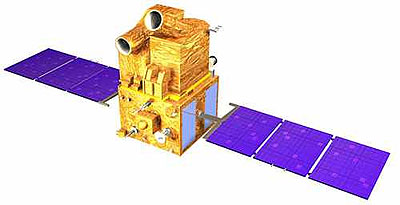 Cartosat-1 or IRS P5 (Indian Remote Sensing Satellite) is a state-of-the-art remote sensing satellite built by ISRO which is mainly intended for cartographic applications. It is the eleventh satellite to be built in the Indian Remote Sensing (IRS) satellite series. Weighing 1560 kg at lift-off, Cartosat-1 is launched into a 618 km high polar Sun Synchronous Orbit (SSO) by PSLV-C6.

Cartosat-1 carries two state-of-the-art Panchromatic (PAN) cameras that take black and white stereoscopic pictures of the earth in the visible region of the electromagnetic spectrum. The swath covered by these high resolution PAN cameras is 30 km and their spatial resolution is 2.5 meters. The cameras are mounted on the satellite in such a way that near simultaneous imaging of the same area from two different angles is possible. This facilitates the generation of accurate three-dimensional maps. The cameras are steerable across the direction of the satellite's movement to facilitate the imaging of an area more frequently. The images taken by Cartosat-1 cameras are compressed, encrypted, formatted and transmitted to the ground stations. The cameras operate in the 500 - 750 nm wavelenght and are tilted +26 deg and -5 along the track. The images are reconstructed from the data received at the ground stations.

Cartosat-1 also carries a Solid State Recorder with a capacity of 120 Giga Bits to store the images taken by its cameras. The stored images can be transmitted when the satellite comes within the visibility zone of a ground station.

After its separation from the fourth stage of PSLV, Cartosat-1 is made to accurately point towards the earth through a series of complex manoeuvres. This is followed by a thorough checkout of the satellite, switching on the cameras and fine tuning of the orbit.