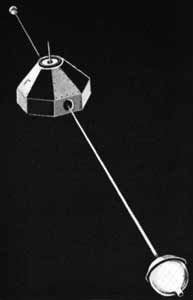 GGTS (Gravity Gradient Test Satellite) were two experimental satellites to investigate gravity gradient stabilization in geostationary orbits. They were each launched together with 7 IDCSP communications satellites. The GGTS satellites used the same bus as the IDCSP, but were battery powered.

The Magnetically Anchored Gravity Systems (MACS) used to stabilize the GGTS satellite consists of two identical subsystem packages, each containing an extensible rod unit and a magnetically anchored spherical viscous damper. When the rod units are extended to the full rod length of 15.8 m. the 5 kg damper tip weights provide a symmetric dumbbell configuration. The total weight of the stabilization system is 12 kg.

GGTS 1 was successfully launched on a Titan-3C into near geosynchronous orbit. It was hoped, that within 60 days after launch the satellite would reach a stabilization of ±8° on the x- and y-axis. The results were compromised, as one of the dampers was magnetically contaminated.

The GGTS 2 mission was lost due to a launch vehicle failure.