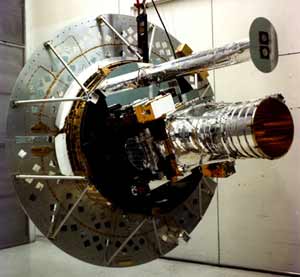 The SME (Solar Mesosphere Explorer) mission objective was primarily to investigate the processes that create and destroy ozone in the Earth's mesosphere and upper stratosphere. Some specific goals were to:

Spin stabilized at 5 rpm, the satellite moved in a 3 a.m. to 3 p.m. sun-synchronous orbit. The spacecraft body was a cylinder approximately 1.7 m × 1.25 m and consisted of two major modules: the observatory module that housed the scientific instruments, and the spacecraft bus. The spin axis was oriented normal to the orbital plane. The command system was capable of executing commands in real time or from stored program control. Power was supplied by a solar cell array. The telemetry system was used either in a real-time or in a tape-recorder mode.

All instruments on-board the SME were turned off in December 1988 because of energy considerations.