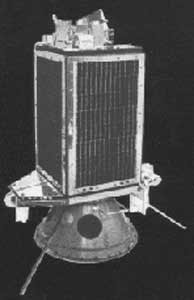 UoSAT-1 (University of Surrey Satellite) was launched on a Delta-2310 from Vandenberg AFB, as a secondary payload to the SME. It was placed into a 560 km 3am-3pm sun-synchronous orbit, and was to investigate and demonstrate the feasibility of the design, construction and launch of a scientific satellite at low cost. The satellite program was completed within a 30 month time-scale, a within a budget of 250k pounds. It was designed, built, and operated by the University of Surrey team. UoSAT-1 signals were heard, decoded and analysed by thousands of radio amateurs, schools, colleges, and universities around the world.

In April 1982, after seven months in orbit, the satellite uplink was inadvertently blocked by the downlink, preventing commands from being received. This situation lasted until September, but with the assistance of the Stanford Research Institute in the US, this situation was solved. The predicted orbital lifetime was 3.5 years, but the satellite was only to decay more than 8 years later on the 13th October 1989, whilst still operational.