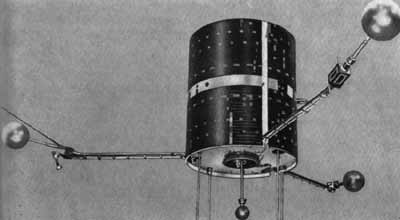 The ESRO 4 (European Space Research Organisation) spacecraft was designed to investigate neutral particle and ion concentrations in the ionosphere and near magnetosphere, to detect auroral particles, and to monitor solar particles in order to discover the mechanism by which they penetrate and diffuse in the magnetosphere. It carried:

The spacecraft was launched into a polar orbit with a nodal regression rate near zero, thus providing a complete scan of local time in 1 year. To provide an altitude scan over the whole globe, the perigee precessed at a rate of -3.5 deg/day. The spacecraft was cylindrical in shape (similar in construction to ESRO 2), was spin stabilized, and used a PCM/PM telemetry mode transmitted in three forms: real-time telemetry at 64 bps, tape-recorder playback, and high-speed telemetry at 10,240 bps. The spacecraft spin rate was about 1 rps. The spin axis direction was changed periodically during the mission. The spacecraft reentered the earth's atmosphere after a successful mission on 15 April 1974.