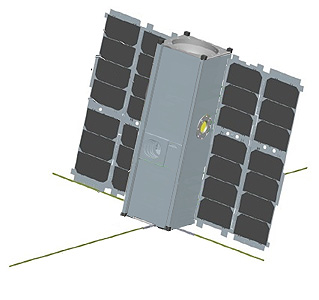 CuSPP (CubeSat mission to study Solar Particles over the Earths Poles) is a 3U CubeSat space weather missions by the Southwest Research Institute (SwRI), that will study the sources and acceleration mechanisms of solar and interplanetary (IP) particles near-Earth orbit. It will study magnetospheric ion precipitation in the high-latitude ionosphere.

CuSSP will Increase the TRL of the SwRIs Suprathermal Ion Spectrograph (SIS) concept so that it may fly with reduced risk and cost on future Heliophysics missions. CuSPP sweeps through the polar cap regions and all magnetospheric L-shells at an orbital period of ~95 minutes from a ~550 km circular, >65° inclination, Low Earth Orbit (LEO).

CuSPP will fly as a secondary payload as early as 2017. It will reside in a high-inclination (> 65 degrees) low-Earth orbit, approximately 500 km above Earth, for the duration of its mission.

When NASA searched for CubeSats to fly on the maiden SLS mission, the team realized they had an opportunity to do some serious interplanetary space weather research for a fraction of the usual cost. With only a relatively small amount of additional funding to reconfigure the satellite and instruments as a 6U-CubeSat, the team won a spot for the CuSP (or CuSPP+) on SLS for a ride to interplanetary space. The CuSP