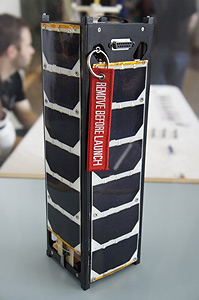 The Canadian ConSat-1 3U CubeSat, built by Space Concordia, aims to analyze radiation characteristics in the South-Atlantic Anomaly, and test technology payloads. Space Concordia is a team of Concordia University Engineering students who want to learn the techniques and processes of astronautical engineering.

The South-Atlantic Anomaly is a plasma cloud 200 km from the Earths surface, located above the east coast of South America. It appears to be constantly growing in size and a NASA report speculates that by 2240 it might cover approximately half the southern hemisphere. ConSat-1 is to investigate various aspects of the plasma cloud: its temperature, its atomic and molecular composition, its density, and its volume.

Canada is an Associate Member of the European Space Agency (ESA) and ConSat-1 is one of the educational CubeSats chosen for Phase 1 of ESA's Fly Your Satellite! initiative, although it was not selected for launch. ConSat-1 has been completed, but lacking a launch opportunity, it was put on hold in favor of the second satellite.

A second Cubesat, ConSat 2, later renamed Aleksandr, is being built to study the long-term performance of a new self-healing material in a microgravity environment.