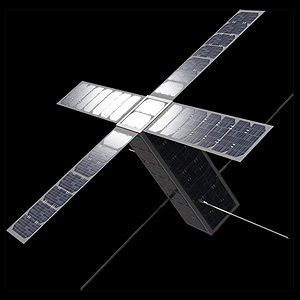 BitSat is an experimental communications satellite constellation by Dunvegan Space Systems (DSS) consisting of 24 3U CubeSats.

Dunvegan Space Systems (DSS) CEO and Bitcoin pioneer Jeff Garzik announced in March 2015, that he has signed a contract with Deep Space Industries (DSI) to build a 24 BitSat satellite constellation as the first element of a new strategic alliance between the two firms.

The nanosats to be used in the Dunvegan constellation designed by DSI provide an order of magnitude cost advantage over traditional telecommunication satellites. Based on the industry standard 3U Cubesat form factor, BitSat enables a cost and performance framework that supports the open platform business model employed by Dunvegan.

Dunvegan plans to have the BitSats keep a complete record of bitcoins ever-growing blockchain ledger, thus acting as crucial full nodes to backup bitcoins all-important core database at a time when the number of earth-based computers providing this vital storage service has declined. Dunvegan will also offer BitSats to paying customers, who would use them for proprietary data storage solutions and communications services. For such companies, which might choose a space-based operation for, among the reasons, keeping their most sensitive data physically removed from potential attackers, the company already has a price menu: $1 million for one BitSat, $19 million for a full 24-unit constellation.

The DSS constellation will be the first-ever constellation of communication satellites based on open platform principles, with a focus of providing communications, data processing, storage and broadcasting capabilities in space. The deal to build and fly the spacecraft was signed after a several months long interaction between the two firms, including a detailed constellation and spacecraft design project completed last summer by Deep Space at its Silicon Valley based NASA Ames facility.

Building on expertise in open-source software and democratized financial systems, Garzik launched this new company to capitalize on the rapidly emerging commercialization of space and advancements in technology platforms. Dunvegan specializes in distributed applications and computing solutions for the space based market, including Software-as-a Service (SaaS) platforms and financialization of space resources.

The satellites were planned to be launched by Q4 2015 or Q1 2016. Apparently the effort stalled.