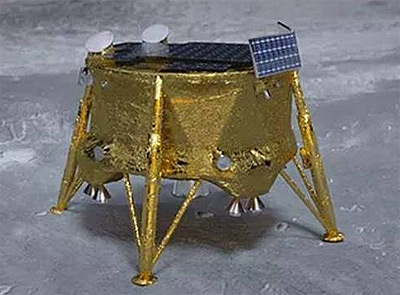 The SpaceIL Lunar Lander or Beresheet (also transcribed B'reshit) is a lunar lander developed by the Israeli nonprofit organisation SpaceIL. Beresheet was nicknamed "Sparrow" during development. It was originally an entry to win the Google Lunar XPRIZE (GLXP).

The SpaceIL Lunar Lander is a lunar lander, which has a propulsion system to enable itself to leave earth orbit and to enter a trajectory to the moon. The lander has a launch mass of 585 kg, including 435 kg of fuel

Beresheet is equipped with instruments to measure the moons magnetic field and a NASA provided Laser retro reflector array. It also carries a digital time capsule of Israeli cultural and historic artifacts.

After landing on the lunar surface, the lander was originally to reignite its propulsion system to move a distance of at least 500 m to satisfy the rules of the GLXP. After the end of GLXP, this is no longer planned.

In October 2015, SpaceIL contracted via Spaceflight Inc. a shared launch to earth orbit on a SpaceX Falcon-9 v1.2 (Block 5) rocket launched from Vandenberg. Later it was rebooked on a launch with the PSN 6 (Nusantara 1) communications satellite to a supersynchroneous transfer orbit, also on a Falcon-9 v1.2 (Block 5) rocket launched from Cape Canaveral.

In late 2017, SpaceIL tried to raise $20 million by the end of the year, from both the public as well as the Israeli government, or else it would be forced to cancel the entire mission. In mid 2018, a launch date for December 2018 was announced with the lander being launched as a secondary payload on a mission to deploy a communication satellite. The landing is planned to take place on 11 April 2019 in Mare Serenitatis.

SpaceIL considered starting the project of a second lander, but decided in July 2019 not to make a second lunar landing attempt. Firefly has announced a partnership with IAI to build the Genesis lunar lander derived from Beresheet in the USA to offer it to NASA throught the Commercial Lunar Payload Services (CLPS) program.