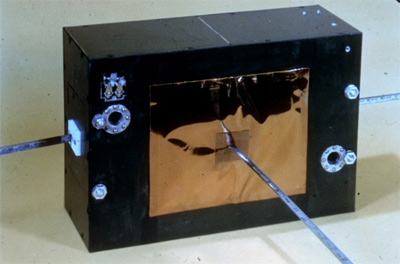 OSCAR 5 (Orbiting Satellite Carrying Amateur Radio 5) or Australis was the first amateur satellite built in Australia by students at The University of Melbourne, Melbourne, Victoria, Australia.

The battery powered Australis consisted of a 43 × 30 × 15 cm rectangular prism with reflective stripping applied for temperature control. Four monopole antennae extended from the sides. The satellite carried two tracking beacon transmitters. It carried horizon sensors for determination of spin rate. Passive magnetic attitude stabilization was performed by carrying two bar magnets to align with the Earth's magnetic field in order to provide a favorable antenna footprint. A command system was used to activate the satellite 10 m (29.450 MHz) beacon only on weekends (Friday AM to Monday AM). The seven-channel telemetry reported, by modulation of the beacon signals, the battery conditions, spacecraft temperatures, and horizon sensor responses. It transmitted telemetry on both 2 meter (144.050 MHz at 50 mW) and 10 meter (29.450 MHz at 250 mW) bands that operated for 23 and 46 days respectively.

Australis-OSCAR 5 was launched piggyback with TIROS M. Several thousand transmissions were logged and The University of Melbourne compiled tracking reports from more than 200 observers of stations in 27 countries.