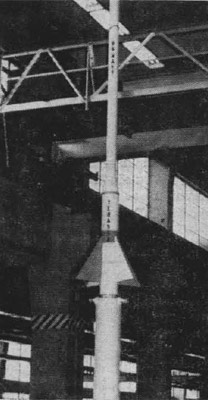 Terasca, or Terrier ASROC Cajun, was an American three-stage sounding rocket developed and launched by the United States Navy. Derived from a combination of the Terrier, ASROC and Cajun rockets, three launches were attempted during 1959, but only one was successful.

The Terasca rocket was developed during early 1959 by the Naval Ordnance Test Station, located at China Lake, California, to fill a U.S. Navy requirement for a three-stage sounding rocket, intended to launch experimental payloads for conducting high-altitude research.

The rocket consisted of a combination of existing rocker stages; the first stage was a booster of the Terrier surface-to-air missile, the ASROC anti-submarine rocket provided the motor for the second stage, and a Cajun sounding rocket was used as a third stage.

The Terrier first stage produced 258 kN thrust, the ASROC second stage provided 49 kN, and the third-stage Cajun motor had a thrust rated at 36 kN. The theoretical apogee for Terasca was 158 km with an scientific payload of up to 11 kg.

Three launch attempts of the Terasca missile were made from the launch facility at Vandenberg Air Force Base during 1959. The first launch attempt took place on May 1; this launch was a failure. A second launch attempt on June 26, was successful, with the rocket reaching an apogee of 97 km. A third launch, attempted on August 12, was also a failure.