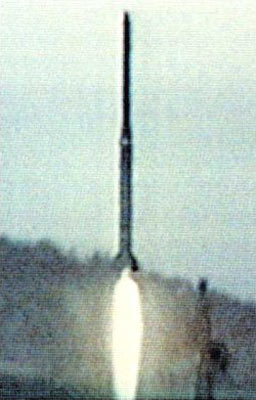 Pekdosan-1 (sometimes transcripted Paeutudan-1, but often refered by the western code name Taepodong-1) was North Korea's first space launch vehicle. It has also the capabilities of a modest intercontinental ballistic missile (ICBM) carrying a practically useless 50 kg warhead over 6000 km. A two stage verion could be used as a MRBM with a range of 2000 km.

It seems to consist of three stages, the first being the Nodong MRBM, the second being a modified Hwasong (Scud) SRBM  missile. The first flight appeared to have failed due to underperformance of the solid fueled third stage. Further tests have been suspended due to pressure from the United States.

Due to the development of the Unha rocket, it seems, that the Pekdosan-1 was merely a technological demonstrator, which was never intended for operational use.