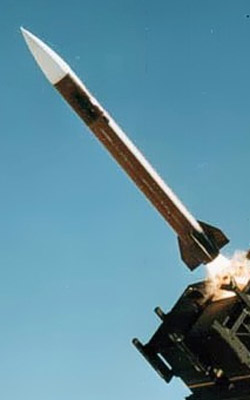 The MIM-104 Patriot is a medium / long-range surface-to-air missile in current operational U.S. Army inventory. Developed under the designation SAM-D in the late 1960ies, it is the replacement for the MIM-23 Hawk missle. In May 1967, Raytheon was selected as prime contractor for SAM-D development, and firing trials of SAM-D test missiles began in November 1969, but full-scale development didn't start until January 1976. The development of the motor led also to the development of the Malemute sounding rocket. In 1984, the Patriot finally reached Initial Operation Capability with its first U.S. Army units.