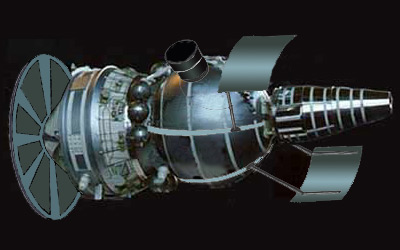 The soviet Zenit-4M (Rotor, 11F691) was an improved version of the Zenit-4 high resolution reconnaissance satellite and was part of the Vostok-based Zenit-family.

The satellites consisted of the Vostok-based service and reentry modules. The spherical reentry module returned both the cameras and the film to earth at the end of the mission. This version replaced the Ftor-4 camera system with the improved Ftor-6 camera. Additionaly they were the first series to incorporate the reignitable maneuvering module on top of the return capsule. Reportedly they also featured an thermal protection screen on the service module, a thermal baffle for the optics and aerodynamic stabilizers to protect them from atmospheric molecular heating during their very low apogee passes. They were designed for flights durations of 13 days.

These satellites operated typically from 65° inclination orbits with an initial altitude of 203-290 km. During the mission, they maneuvered to a low perigee orbit of 178-312 km altitude. Also missions with inclinations of 51.6°, 72.8° and 81.3° were flown.