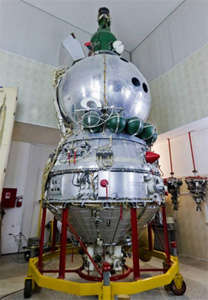 The soviet Zenit-2M/NKh (Gektor-Priroda, 11F690) was a civil earth resources version of the military Zenit-2M (Gektor) area surveillance reconnaissance satellite. It was part of the Vostok-based Zenit-family. The purpose was to map the natural resources of the earth in the interests of various branches of the national economy of the USSR and their international partners.

The satellites consisted of the Vostok-based service and reentry modules. The spherical reentry module returned both the cameras and the film to earth at the end of the mission. This version used the Ftor-2R3 camera. The battery powered spacecrafts were designed for flights durations of 12 to 13 days.

The Zenit-2M/NKh satellites could carry autonomous scientific and technical Nauka payloads from the front end of the spherical return capsule.