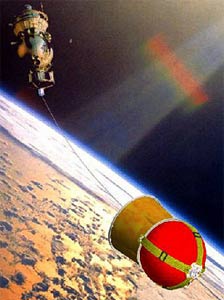 YES2, the 2nd Young Engineers Satellite, is an educational project in which European students build, fly and re-enter the first student-built re-entry vehicle with a 30-km tether. It is an initiative of the ESA Education Office together with the Dutch space company Delta-Utec SRC and is supported by the ESA s Human Spaceflight Directorate.

The YES2 experiment will fly on ESA's Foton-M3 microgravity mission, which is scheduled for launch in September 2007. During the flight it will deploy its own mini-satellite and re-entry vehicle called Fotino. This Fotino capsule was originally scheduled to fly with the previous Foton-M 2 capsule as a precursor mission, but was droped from this mission and incorporated into the YES2 mission as a reentry body.

There are three main components of the experiment:

During the flight, FLOYD will eject the other two components. There will then be controlled deployment of a 30 km long tether. Orbital dynamics will cause the Fotino capsule to be positioned in front of the mother spacecraft. By bringing the deployment to a halt, a pendulum-like swing will be induced. When the capsule and tether are swinging through the local vertical, the tether will be cut. Since the capsule will then be going too slowly to stay in orbit, it will begin to re-enter the atmosphere from an altitude of about 250 km, protected by a heat shield made of novel materials. Once it reaches an altitude of 5 km, a parachute will deploy to ensure a soft landing on the steppes of Kazakhstan.

There are many notable aspects to the groundbreaking mission:

The ESA Education Department oversees the YES2 educational project and is the primary contributor of funding for student organisation and spacecraft hardware. The cost of the launch is covered by the Education Department and the agency's Directorate of Human Spaceflight, Microgravity and Exploration. The project also receives valuable support from European industry.

The YES2 mission was launched onboard the Russian carrier Foton-M3 in 2007.