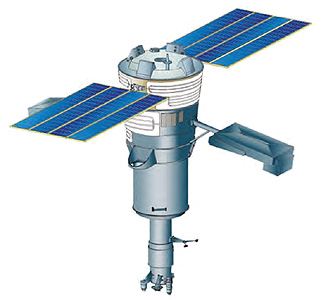 The Neman or Yantar-4KS1M satellites were improved versions of the Terilen elctro-optical reconnaissance satellites. They were transmitting the data via Potok (Geizer) relay satellites.

The Yantar-2K (Feniks) was not capable of providing strategic warning of attack and fast reaction due to the need to return the film. Therefore additional variants were developed, one of them the detailed electro-optical and operational reconnaissance satellite Yantar-4KS. The spacecraft was designed to relay visual and infrared band images via a digital data link to the planned Potok-Luch GKRSS relay satellite system.

There were two phases to the project plan. The first phase spacecraft, the Yantar-4KS1 (Terilen), would be launched by the Soyuz-U launch vehicle, begin flight trials of system components in 1979, with the system to be accepted into the military by 1981. Phase 2 would be the more capable Yantar-4KS2, launched by the more powerful Zenit-2 launch vehicle, with flight trials to begin in 1983.

Soviet digital electronics technology hampered a fast development. The structure and wire harnesses for the first spacecraft were completed in 1978, but delays in the electronics meant that the first flight could not begin until the end of 1982. But the very first trials flight, in conjunction with the first Potok communications relay satellite, proved the worth of the system, with immediate operational use of the imagery. Yantar-4KS1 was accepted into military service in 1985.

On 1 June 1983 the Yantar-4KS2 was cancelled and it was decided to modernise the Yantar-4KS1 instead, forming the Yantar-4KS1M. Flights of the modified model began probably in 1991, with flight times of 238 and 259 days, versus the maximum 207 days of the unimproved version. After the fall of the Soviet Union, the satellites were being operated for over a year before having their mission terminated, despite a switch from the Soyuz-U2 to the less capable Soyuz-U launch vehicle.