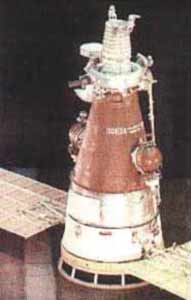 The Russian Yantar-2K or Feniks series was the first generation of the high resolution film-return variant of the Yantar reconnaissance satellite series.

These satellites were developed by TsSKB Progress, Samara, and were built at OAO Arsenal, St Petersburg. They consisted of a service module with reignitable propulsion and two solar arrays, a large conical reentry vehicle with the camera and two small spherical reentry vehicles (SpK, Spuskayemaya Kapsula). The launch mass was about 6700 kg. The orbital life time was up to 30 days. They carried the Zhemchug-4 camera system in the main return capsule, which allowed the camera system and the board computer to be reused. The return capsules could be reused up to three times.

The satellites were launched by Soyuz-U from Plesetsk and Baikonur, typically into a 170 km by 350 km orbit with inclinations between 62.8° and 67.2°. The typical landing area was near Orenburg.

The Yantar-2K series introduced in 1974 and continued until it was phased out in 1983. It operated in parallel with the slightly improved Yantar-4K1 (Oktan) satellites, with the improved gradually Yantar-4K2 (Kobalt) satellites taking over since 1981.