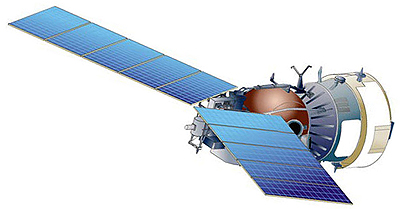 The Soviet / Russian Yantar-1KFT (Kometa) cartographic satellite was a replacement for the Zenit-4MT (Orion) satellites.

The Space Mapping System "Kometa" composed of the Yahont-1 imaging payload with the TK-350 topographic camera and the high resolution camera Topaz KVR-1000, integrated with on-board equipment for external orientation elements determination, is designed to provide large scale topographic and digital maps. On-board equipment includes two star positioning cameras, a laser altimeter, navigation sensors and synchronizing devices. The system allows topographic and thematic maps to be produced for any area of the Earth.

The spacecraft features a Yantar-based propulsion module with a Zenit-based reentry capsule. The return capsules could be reused several times. The Yahont-1 was mounted inside the reentry vehicle, while the larger KVR-1000 was mounted in front of it with the film beeing delivered into the reentry-vehicle.

The satellite operates in near-circular orbit at an average altitude of 220 kilometers and has an orbital duration of 45 days. The total film capacity covers approximately 10.5 million square kilometers of land area. The entire system is then retrieved from orbit and landed at the preliminary defined location.

As a replacement, the electro-optical Bars satellite was developed, which was later cancelled and replaced by the Bars-M.