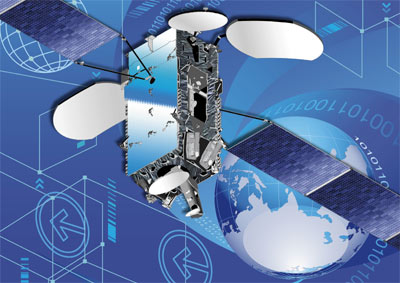 In February 2009 Gazprom Space Systems ordered two Yamal-400 communications satellites from Thales Alenia Space. The satellites named Yamal 401 and Yamal 402 will be based on the Spacebus-4000C3 bus and are planned to be launched in 2011. According to the signed document Thales Alenia Space, as the prime contractor, will be responsible for design, manufacture, testing and turnkey delivery of Yamal-401 and Yamal-402 satellites as well as for the associated ground segment deployment. Originally planned to be launched on Ariane-5ECA vehicles, the satellites have now been transferred to Proton-M Briz-M rockets.

Yamal-400 satellites will have guaranteed lifetime of 15 years. Yamal-402 will be placed at 55° East orbital slot and will be equipped with 46 Ku-band transponders providing for the coverage zone over the most part of the territory of Russia, CIS, Europe, Middle East and Africa.

The satellite was launched on 8. December 2012, but was dropped off in a lower than planned orbit due to an early shut down of the Briz-M upper stage. Yamal 402 is expected to raise itself to the planned orbit, albeit with cost of the lifetime reduced by 4 years.