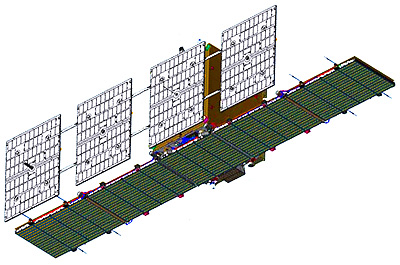 R2 Space was founded in 2018 in order to provide cutting-edge commercial satellite technology to address the intelligence, surveillance, and reconnaissance needs of the United States Government. R2 Space plans to launch and operate eight XR satellites over a series of launches.

The Attitude Determination and Control System (ADCS) for each XR satellite consists of a GPS, Inertial Management Units, magnetometers, star trackers, torque rods, and reaction wheels, and is capable of achieving a pointing accuracy of less than +/- 0.1 degrees, and a GPS accuracy of less than 5 meters. During normal operations, the phased arrays will be Earth facing with look angles between 10 and 30 degrees relative to nadir. Phased arrays will be side looking with a 90-degree offset from the velocity vector.

Each XR satellite is equipped with a low thrust propulsion system that uses a solid metal propellant and produces a max delta V of 400 meters per second. During normal propulsive operations, the solid metal is heated and becomes the ion source; ions are then accelerated by an electric field to generate thrust.

The XR-1 satellite will be the first deployment of the XR constellation.is planned to be launched on an ESPA class adaptor on a Falcon-9 v1.2 (Block 5) ride-share mission. The XR-1 satellite is projected to be in a Sun-Synchronous Orbit and have an operational altitude of 550 kilometers with a 97.7-degree inclination angle.