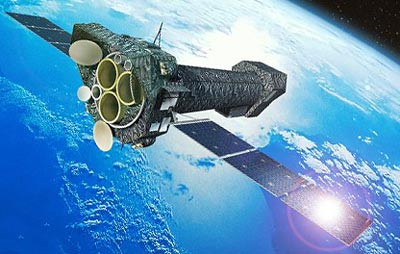 The spacecraft consists of main sections:

This 'tri-clops', with its golden eyes is more than 10 meters long, just fitting under the Ariane-5 fairing for its launch. Its pair of solar panels have a 16 meter span.

The spacecraft's design features extremely high mechanical stability. Its position and control systems allow it to point at targets in the sky over long periods with a remarkable pointing accuracy of 0.25 arcsec over a ten second interval.

X-rays can only be focused by changing their course accomplished by bouncing them off a surface at a shallow angle. XMM-Newton uses barrel-shaped mirrors angled along their length to focus them on the detectors. The three 'mirror modules' each have 58 wafer-thin nickel mirrors, which are gold-plated and nested in each other just a few millimeters apart. The total mirror surface area exceeds 120 m², larger than a tennis court. Constructing the mirror modules to such a level of perfection is one of the programme's greatest achievements.

XMM-Newton also carries an 'Optical Monitor' which will observe in the visible and ultraviolet the same region of the sky as the targeted X-ray sources.

The science instruments are: