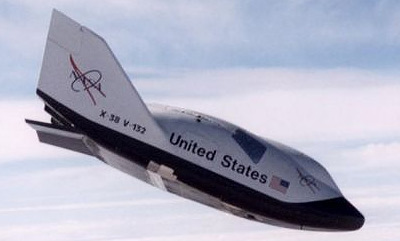 The X-38 was a prototype for a Crew Return Vehicle (CRV) for the International Space Station. The X-38 could have been reworked into a real crewed CRV after its uncrewed orbital test flight.

The X-38 design used a wingless lifting body concept originally developed by the U.S. Air Force in the mid-1960s during the X-24 program. Contrary to the X-24, the X-38 featured a stearable parafoil for landing. Flight control was mostly autonomous, backed up by a ground-based pilot. It featured a skid gear for landing. The X-38 weighed 10660 kg and was 9.1 meters long. The battery system, lasting nine hours, was to be used for power and life support. If the Crew Return Vehicle was needed, it would only take two to three hours for it to reach Earth.

Two atmospheric prototypes called X-38 V-131 and V-132 were build for atmospheric drop tests. The V-131 was rebuild with a modified shell incorporatiing changes for the planned orbital vehicle. The drop tests were conducted at Edwards AFB by using NASA's NB-52 carrier plane.

The orbital vehicle was called X-38 V-201. It would have featured a DPS (deorbital propulsion system) for deorbiting. The eight-thruster DPS would adjust the spacecraft's attitude and retrofire to slow the X-38 down, allowing gravitational attraction to pull it back into Earth's atmosphere. After the deorbiting burn, the DPS module would have been jettisoned.