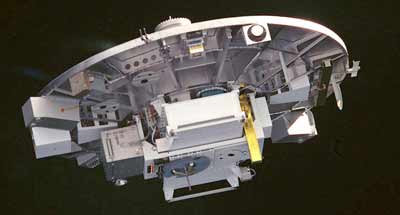 WSF (Wake Shield Facility) was an american retrievable spacecraft that was released from the Shuttle. The wake region behind the 4 m disk-shaped, 1935 kg spacecraft would have been even more vacuous than the ambient region and could have enabled growth of slimmer thin-film semiconductors through molecular beam epitaxy technique during a planned two-day mission.

On the first flight, the space craft could not be deployed in orbit and was operated from the manipulator arm.

On the second flight, the experiment had to be terminated and the spacecraft retrieved sooner than was planned because of overheating problems. The results of the experiment were unavailable.

The third flight was finally successful.

An improved WSF-4 Free Flyer planned for 1998 was to be equipped with solar panels for greater power and it was to be capable of processing up to 300 wafers.