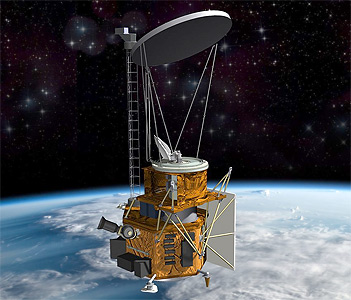 WSF-M (Weather System Follow-on - Microwave) is the next-generation operational environmental satellite system for the Department of Defense (DoD) to replace the microwave capabilities of the DMSP satellites.

Ball Aerospace has been selected in late November 2017 by the U.S. Air Force's Space and Missile Systems Center (SMC) to deliver WSF-M is a predominantly fixed price contract that will provide for system design and risk reduction of a Low Earth Orbit (LEO) satellite with a passive microwave imaging radiometer instrument and hosted Government furnished energetic charged particle (ECP) sensor. The contract will include options for the development and fabrication of two LEO satellites as well as options for launch vehicle integration, launch and early orbit test, and operational test and evaluation support. This mission will improve weather forecasting over maritime regions by taking global measurements of the atmosphere and ocean surface.

As the prime contractor, Ball will be responsible for developing and integrating the entire microwave system, which includes the microwave instrument, spacecraft and system software.

This new environmental satellite system leverages the Ball-built Global Precipitation Measurement (GPM) Microwave Imager (GMI) instrument, which is the on-orbit reference standard for calibrating precipitation measurements in NASA's GPM constellation. The WSF-M bus will be based on the Ball Configurable Platform, a proven, agile spacecraft with 50 years of on-orbit operations for affordable remote sensing applications.

WSF-M also will carry a government-furnished space weather payload developed by the Air Force Research Laboratory and intended for inclusion on both WSF-M satellites.