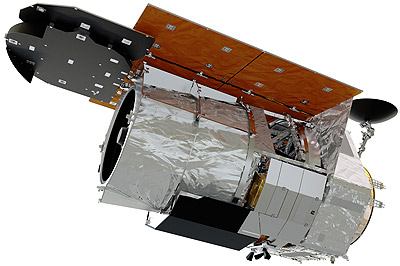 The current Astrophysics Focused Telescope Assets (AFTA) design of the mission makes use of an existing 2.4 m telescope, inherited from the defunct FIA-Optical reconnaissance satellite program, to enhance sensitivity and imaging performance. WFIRST-AFTA will settle essential questions in both exoplanet and dark energy research and will advance topics ranging from galaxy evolution to the study of objects within the Galaxy and within the Solar System. It is the top-ranked large space mission in the New Worlds, New Horizon (NWNH) Decadal Survey of Astronomy and Astrophysics. The main instrument is a wide-field multi-filter NIR imager and spectrometer. With the 2.4 m telescope, a coronagraph instrument has been added to the payload for direct imaging of exoplanets and debris disks.

The payload features a telescope with a 2.4-meter aperture and on-axis secondary mirror, which feeds two different instrument volumes containing the wide field and coronagraph instruments. The telescope hardware was built by ITT/Exelis under contract to another agency and is being made available to NASA. The telescope is a space flight qualified 2.4-meter, obscured two-mirror system. Repurposing modifications will include conversion to a three-mirror anastigmat (TMA) optical configuration to enable a wide field-of-view instrument and replacements for hardware that was not provided to NASA. This existing hardware significantly reduces the development risk of the WFIRST-AFTA payload.

WFIRST-AFTA is designed to be robotically serviceable, should a future robotic servicing capability be deployed in geosynchronous orbit. Serviceability is implemented at a module level, i.e. an entire instrument or a spacecraft module containing multiple electronics boxes. The modularity will also be a benefit during integration and test of the observatory. On the payload side, an instrument carrier was designed to attach to the existing telescope metering structure interfaces and provide volumes for two instrument modules. The instrument carrier provides mechanical latches, with design heritage from HST, to interface the instrument modules to the carrier, contains harness to route power and data between the spacecraft and the instrument modules, and provides thermal isolation between the two instrument volumes. Each of the spacecraft modules includes a kinematic Module Restraint System based on the Multimission Modular Spacecraft design, which was proven during the on-orbit module change out on the Solar Maximum Mission Repair Mission.

Originally a 28.5° inclined geosynchronous orbit was planned, but it was changed to a halo orbit around Sun-Earth Lagrange point L2.

The mission was baselined for a launch in 2024 on a Delta-4H (upg.) class rocket, which is no longer available. In March 2020 a launch on either a Falcon-Heavy (Block 5) or a Vulcan Centaur VCxx hass evaluated. ULA decided not to bid for the launch leaving only the Falcon Heavy. The mission was delayed to 2027.

In the FY2019 budget, the cancellation of WFIRST was proposed. A spending bill to be marked up by the House Appropriations Committee would provide some funding for the mission, but not necessarily enough to keep the mission on schedule. The Trump administration's 2021 NASA budget proposal again tried to cancel the mission. WFIRST was renamed NGRST (Nancy Grace Roman Space Telescope) in May 2020.