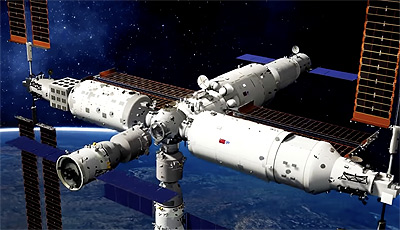 The 22 ton Wentian features crew quarters and an airlock cabin which will become the main exit-entry point for extravehicular activities (EVAs) once active, replacing the role now played by the Tianhe docking hub. Its main role is hosting experiment racks for science experiments, while also providing backups to the life support and control functions of Tianhe. Wentian carries a five-meter-long robotic arm, supplemental to the 10-meter-long Tianhe arm. The two arms can also join together. It also features 30-meter-long solar arrays, boosting the power available to the CSS.

→ Missions to the Chinese Space Station (CSS) and crew list.