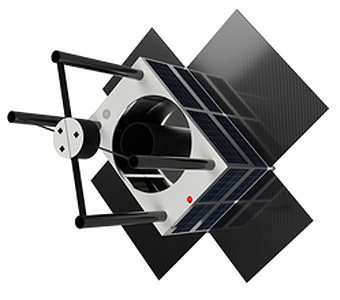 SpaceFab.US is developing the Waypoint space telescope satellite, which can also be employed for earth observation

The 12U CubeSat based satellites feature a telescope with extending optics.

SpaceFab.US is building the Waypoint space telescope with a 21 centimeter mirror, launching as a co-payload on a SpaceX launch vehicle in 2019. This commercial telescope will have an image intensified ultraviolet and visible camera, and a 48 megapixel camera for visible and near-infrared imaging for astronomical and Earth observation purposes, available for use by customers around the world. The telescope is a Corrected Dall-Kirkham telescope with 1750 mm focal length. It features a 21 cm silicon carbide primary mirror and a deployable secondary mirror. The instruments for astronomy are a 48 Megapixel imager for visible and near-infrared wavelengths and a 8 Megapixel imager for ultraviolet and visible.

For earth imaging, the visible / near-IR camera has a ground resolution of 1 meter and the UV camera 1.5 meter. The Waypoint telescope will also provide 150 band hyper-spectral camera for Earth observation at 3 meter resolution for use in scientific and commercial applications.

SpaceFab's Waypoint telescope design provides twice the resolution of other satellite telescopes of equivalent size and weight by using extending optics. The telescope is launched with a standard 12U cubesat form factor, then the secondary optics assembly is extended when in orbit. This doubles the telescope focal length while cutting the size, weight, and launch cost in half compared to conventional satellite telescopes with similar resolution.

The development of Waypoint was cancelled in favor of the larger 150 kg Viewpoint, which features a 50 cm telescope.