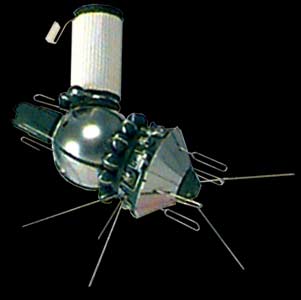 The Voskhod-3KD was a Soviet crewed spacecraft modified from the Voskhod-3KV and closely based on the Vostok-3K capsule. It was capable to carry crews of two cosmonauts and enabled spacewalks.

The basic difference to Vostok was the elimination of the ejector seat to make room for two cosmonauts in spacesuits. To soften the landing, a solid fuel retro rocket was incorporated. Also a solid fuel back-up retro rocket system was carried in front of the spherical reentry capsule. The 3KD version carried an external inflatable airlock, allowing for spacewalk. After spacewalk, the airlock was jettisoned.

Kosmos 57 was an uncrewed test flight of the Voskhod version with airlock. Although the craft entered orbit successfully and inflated the air lock, it was lost three hours after launch, when an unauthorised radio signal from a tracking station interfered with a legitimate transmission from the ground station causing the retro-engine to fire prematurely, which caused the satellite to spin and finally break up due to self destruction.

Voskhod 2 was a crewed flight with a two men crew (Belyayev and Leonov). Leonov performed the first spacewalk ever, but had problems reentering the inflated airlock. After the airlock was jettisoned, a slow decrease of air pressure was noticed, leading to a earlier than planned return to earth. The capsule reentered safely after a 26 hour flight, but landed in the Ural mountains, nearly 1000 km north of the originally planned landing site. The crew was rescued about 1 day after landing.

The crewed long duration flights with spacewalks, Voskhod 5 and 6, with respectively two female and two male cosmonauts were cancelled.