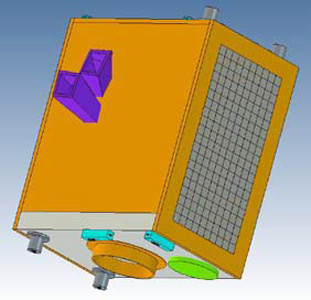 The Vietnam Academy of Science and Technology (VAST) and the Belgian company SPACEBEL signed in March 2012 a preagreement to build the VNREDSat 1b (Vietnam Natural Resources, Environment and Disaster Monitoring Satellite 1b) Earth observation minisatellite. The contract amounting to more than 60 million Euros. was signed in January 2014.

To realize this project SPACEBEL relies upon the expertise of a panel of Belgian partners: QinetiQ Space, AMOS, Deltatec, the Space Centre of Liège, and VITO, who will be responsible respectively for the satellite platform, hyperspectral instrument, integration and testing, and data processing. Prime contractor and architect of the system, SPACEBEL will also develop the on-board software as well as the entire ground segment. The 130 kg satellite is based on the PROBA satellite bus.

VNREDSat-1b will be placed in a Sun-synchronous orbit for a 5 year observation mission. It will allow Vietnam to strengthen its autonomy in the monitoring of phenomena such as deforestation, river and maritime pollution, flooding, agricultural and fishery activities, the effects of climate change, etc. With this information, the Vietnamese authorities will be able to better adapt their environmental management policy to the specific needs of the country.

VNREDSat 1b was originally to be launched in 2017 but was put on hold.