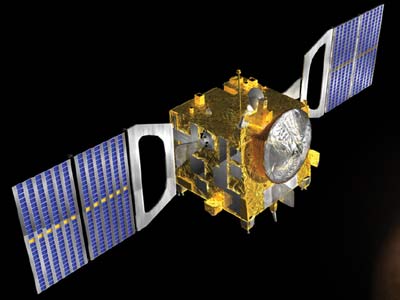 Venus Express is ESA's first mission to Earth's nearest planetary neighbour, Venus. The mission was born after ESA asked for proposals, in March 2001, suggesting how to reuse the design of the Mars Express spacecraft. The guidelines were extremely strict. The mission would have to run to a tight timeframe because it had to reuse the same design as Mars Express, and the same industrial teams that worked on that mission. It would have to be ready to fly in 2005.

Out of a number of promising proposals, ESA selected Venus Express. What made the mission especially attractive was that many of the spare instruments developed for ESA's Mars Express and Rosetta missions could be used to achieve Venus Express's science objectives, which were to study the atmosphere in great detail.

Venus Express was launched from the Baikonur Cosmodrome in Kazakhstan on 8. November 2005. It was carried into space by a Soyuz-FG Fregat rocket and placed immediately in its transfer orbit to Venus. Its journey through space lasted 153 days. Once it is captured by Venusian gravity on 11 April 2006, Venus Express took five days to manoeuvre into its operation orbit, looping around the poles of the planet. At its closest, it reached an altitude of 250 kilometers and at its furthest, it was 66000 kilometers away from the planet. The mapping mission was to last for two Venusian days, about 500 Earth days.

The contact with Venus Express was lost on 28 November 2014. The mission lasted about 8 years.