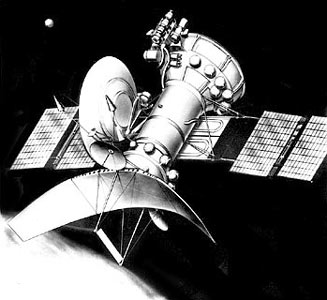 Venera 15 and 16 were a two spacecraft mission designed to use 8 cm band side-looking radar mappers to study the surface properties of Venus. The two spacecraft were inserted into Venus orbit a day apart with their orbital planes shifted by an angle of approximately 4 degrees relative to one another. This made it possible to reimage an area if necessary. Each spacecraft was in a nearly polar orbit with a periapsis at 62° N latitude. Together, the two spacecraft imaged the area from the north pole down to about 30° N latitude over the 8 months of mapping operations.

The Venera 15 and 16 spacecraft were identical and were based on modifications to the the orbiter portions of the Venera 9 and 14 probes. Each spacecraft consisted of a 5 m long cylinder with a 6 m diameter, 1.4 m tall parabolic dish antenna for the synthetic aperture radar (SAR) at one end. A 1 meter diameter parabolic dish antenna for the radio altimeter was also located at this end. The electrical axis of the radio altimeter antenna was lined up with the axis of the cylinder. The electrical axis of the SAR deviated from the spacecraft axis by 10 degrees. During imaging, the radio altimeter would be lined up with the center of the planet (local vertical) and the SAR would be looking off to the side at 10 degrees. A bulge at the opposite end of the cylinder held fuel tanks and propulsion units. Two square solar arrays extended like wings from the sides of the cylinder. A 2.6 m radio dish antenna for communications was also attached to the side of the cylinder.