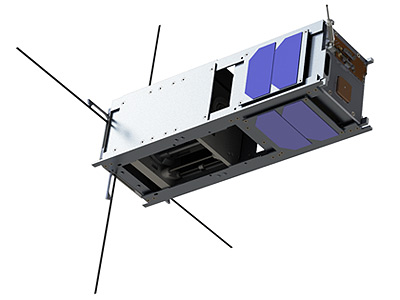 Ut-Prosat-1 is a Virginia Tech student-designed, -built, and -operated flight, which is a follow-on from the VT ThickSat (on ThinSat 2) launch in February 2021, incorporating lessons learned and upgrading specific experiments. The mission science goal is to demonstrate the reusability of lightweight deployable space structures for solar sails, antennas, and other extended components as well as characterizing the dynamic properties of the deployed structure while in space. In addition, the team has set a goal for this mission to serve as a starting point towards developing a reliable satellite bus to host payloads for Virginia Tech researchers as a continuous learning and improvement program.

The inclusion of multiple payloads necessitated a modular approach to spacecraft design that included the development of a standalone payload control module apart from the satellite flight computer. This allows future spacecraft using this design to host multiple payloads operated independently, helping to reduce the cost of a flight for any single payload. Several challenges made the design, test, and build process difficult for the team, including only a year of development time from first design to final delivery, a short operational window in space before de-orbiting, and uncertain launch and power parameters.

The NG-19 VLEO mission is comprised of VSCP-1A (SeaLion from ODU & USCGA) and VSCP-1B (UtProSat-1 from VT), both of which are 3U cubesats to be deployed off the second stage of the Antares-230+ Launch Vehicle.