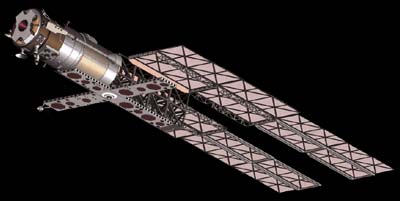 It shared the same US bus with its precedessors, which provided maneuvering capabilities to the spacecraft.

The satellites were built by the KB Arsenal design bureau in Leningrad/St.-Petersburg, and the payloads by the Central Scientific Radiotechnical Research Institute or TsNIRTI in Moscow.

The US-PM were placed into a 420 km orbits inclined 65 degrees by the Tsiklon-2 booster. Systems aboard the 3300 kg satellite included the Radio-Technical Reconnaissance system and systems for electronic camouflage and self-protection. An engine unit maintained the orbital altitude and made a final deorbit of the satellite at the end of the mission.

It has been reported, that Kosmos 2421 failed to open one of its eight solar panel segments after launch.

US-PM will be replaced by the new Pion-NKS ELINT satellites of the Liana system.