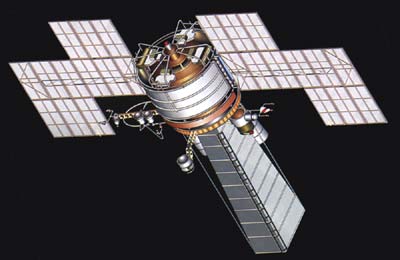 The US-K spacecraft are the high-elliptical-orbit component of the soviet/Russian Oko and Oko-1 early warning systems.

A US-K spacecraft consists of three main subsystems: engine block, device compartment, and optical compartment. All the systems are mounted on a cylindrical frame that is 2 m long and has diameter of 1.7 m. Total mass of a satellite at launch is estimated to be 2400 kg, of which 1250 kg is dry mass. The engine compartment of an Oko satellite includes fuel and oxidizer tanks, four orbit correction liquid-fuel engines and 16 orientation and stabilization liquid-fuel engines. The stabilization engines provide active 3-axis attitude control, necessary for telescope orientation.

The telescope system of a first-generation satellite includes a telescope with a mirror of about 50 cm diameter. The detection system includes a linear or matrix infrared-band solid-state sensor that detects radiation from missiles. In addition to this, the satellite has several smaller telescopes that most likely provide a wide-angle view of the Earth in infrared and visible parts of spectrum, which is used by operators of the system as an auxiliary observation channel. The satellite transmits the images formed by its telescopes directly to the ground control station in real time.

Launches of early-warning satellites into highly elliptical orbits are performed by Molniya-M launchers from the Plesetsk launch site in the northern Russia.

In the beginning of the program, there were serious problems with reliability of the satellites. Of the first 13 satellites, launched in 1972–1979, only seven worked more than 100 days. The satellites were equipped with a self-destruct package that was activated if the satellite lost communication with ground control. Until these packages were removed in 1983, 11 out of 31 satellites were destroyed that way.

Some first-generation satellites were launched into geosynchronous orbit by the Proton launchers under the designation US-KS. These launches, which were conducted from the Baykonur launch site, were all successful.

The choice of observation geometry and of the highly elliptical orbits has been usually attributed to the lack of proper infrared sensors and data processing capabilities that are required for obtaining a look-down capability. According to this logic, in the absence of suitable sensors, the Soviet Union had to rely on a the grazing-angle observation geometry, which allowed the use of less sophisticated sensors than those used by the United States.

The system was configured in such a way that a satellite would be placed into an orbit that had inclination of about 63 degrees. The orbits have apogees of about 39,700 km and perigees of about 600 km. A satellite on this orbit has orbital period of approximately 718 minutes, and makes exactly two revolutions a day.

Since one satellite can be in a position that allows it to detect missile launches only for about six hours a day, providing 24-hour coverage of the U.S. ICBM bases requires at least four working satellites. The system, however, was designed to include up to nine satellites simultaneously. Satellites in the constellation were placed into one of nine orbital planes, which were separated by about 40 degrees from each other.

One reason the system was designed to include satellites in nine separate orbital planes was to increase its reliability and to make sure that a loss of one satellite would not create a gap in coverage. A more important reason, however, was that the chosen configuration made it possible for several satellites to observe the same area simultaneously. The advantage of this is that simultaneous observation is that it reduces the chances that all the satellites that are in a position to detect a launch could be simultaneously blinded by direct sunlight or reflections off clouds.

The first satellite that was placed into the highly elliptical orbit characteristic of the early-warning satellites was Kosmos-520, launched on 19 September 1972. The exact nature of its mission is unclear, since there are not enough data to see if the satellite performed any maneuvers or orbit corrections, but it was reported to be a success.

In the following three years there were four more launches on highly-elliptical orbits, all of which seem to have been experimental. In addition to this, the Soviet Union conducted an experimental launch of one of the early warning satellites, Kosmos-775, into a geostationary orbit.

Beginning in 1977, the Soviet Union undertook a series of launches that seemed to be an effort to built a working prototype of the early warning system. In contrast with previous launches, which sometimes placed satellites into non-standard orbits, in the series that began in 1977 satellites were placed into orbits that would allow them to work together. The resulting constellation was still experimental, for the satellites were deployed on orbits in such a way that their groundtracks were shifted about 30 degrees westward from the position that will later become nominal. The satellites in those orbits could not detect launches from operational ICBM bases. Most likely they were observing test launches of U.S. missiles from the Vandenberg Air Force base, since they would be able to see them under observation conditions that were very similar to the nominal ones.

Judging by the history of deployment, the prototype system was to include four satellites that would provide the minimum capability, ensuring that at least one satellite was in a position to detect a launch at any given moment. However, because of the series of malfunctions and failures, it was not until 1980 that the number of working satellites reached four.

The first operational early-warning satellite in geosynchronous orbit was Kosmos-1546. In May 1984 it reached the point with longitude of 24 degrees west from which it was able to detect launches of U.S. ICBMs.