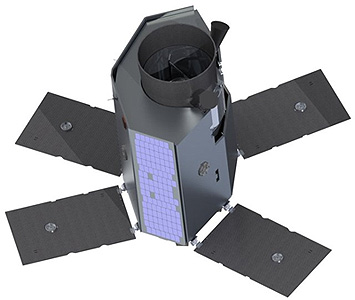 Twinkle is a small, low-cost mission that will use spectroscopy to analyze the light from hundreds of extrasolar planets to reveal the chemical composition, weather and history of worlds orbiting distant stars.

The Twinkle satellite will be built in the UK and launched into a low-Earth orbit within 3 to 4 years, using a SSTL-300 platform designed by Surrey Satellite Technology Ltd and instrumentation led by UCL.

From its orbit 700 km above the Earth, Twinkle will observe more than 100 planets orbiting distant stars. When an exoplanet passes in front of the star that it orbits, a tiny amount of starlight is filtered through the molecules and clouds in the planets atmosphere. Twinkle will pick out this light from the background starlight and split it into a spectrum. Different types of molecules absorb light at specific wavelengths, embedding a pattern of characteristic spikes or fingerprints within the spectrum. By analysing this pattern, one can deduce which gases are present on the planet.

Twinkles instrument will analyse light in the visible and near-infrared wavelengths (0.5 to 5 micrometers). This will allow Twinkle to detect a wide range of molecules, including water vapour, carbon dioxide, carbon monoxide, hydrogen sulphide and exotic metallic compounds. Twinkle will detect organic molecules such as methane, acetylene, ethylene and ethane. It will also be sensitive to precursors to amino acids (the building blocks of life) e.g. ammonia and hydrogen cyanide.

Twinkle is planned for launch by 2019. The payload study is already completed. Preliminary work and the instrument study are funded through a grant from the European Research Council and UK universities. Funding for the overall mission will come from a combination of public and private sources.