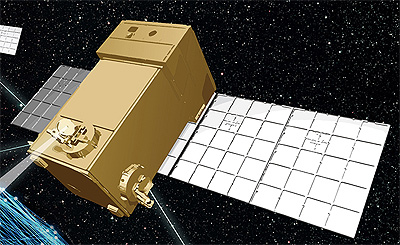 The Transport Layer is an experimental military satellite constellation developed by the SDA (Space Development Agency), which will serve as the backbone of the NDSA, connecting the various satellites to each other and to the war fighter. The Transport Layer will provide the key space network component to the Department of Defenses Joint All-Domain Command and Control.

That first batch will include 20 satellites and will comprise what Pentagon leaders are calling Tranche 0 of the SDAs Transport Layer, a mesh network of satellites operating primarily in low earth orbit and will be able to connect space-based sensors to the war fighter.

The agency has six goals for its Tranche 0 Transport Layer:

Each company will construct two different types of satellites: A-class and B-class. Lockheed Martin and York Space Systems will each build seven A-class and three B-class systems, which must be delivered and ready for launch by September 2022.

The B-class satellites will connect directly to the warfighters via the Link-16 military communications system. They have two optical cross-links each, so that allows them to maintain constant communication with the other transport satellites in plane. The two other nodes will be Link-16 transmitters. Link-16 is an existing tactical communication system used across the services primarily for air and ground systems to share low latency data.

Following Tranche 0, the SDA plans to continuously upgrade and add to its on orbit constellation in two year cycles, with Tranche 1 coming online in FY2024, Tranche 2 supplementing the system in FY2026.